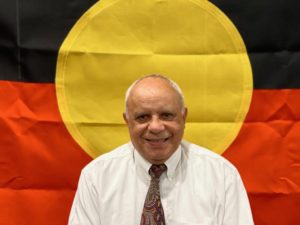 Tom Slockee grew up on Minjungbal country with an emphasis on sharing everything they had. We look back at our chat with the SEARMS chairperson during NAIDOC Week, what reconciliation means to him, and where his passion for housing began.

When you reflect on your early years growing up, what did your family and your people teach you about the importance of a solid and positive home environment?

I grew up in Minjungbal country, the furthest north you can go in NSW... it’s part of the Bundjalung nation. What I loved about it most was that Mum and Dad were strong about us making our own way in life, and not depending on others. One of the main things I remembered was the caring, and sharing. If we caught twelve fish and we only needed two, we’d take the other 10 and share it around the community. And we were in the midst of a dominant white society and there was an attitude of racism there. Mum used to speak the language (Butchulla country) but she was too scared to teach it to us. She taught us a few words but she was afraid the police would come and arrest her if she taught the language. We couldn’t dance, we couldn’t play didgeridoo. But the uncles used to bring this older Aboriginal fella down and he would teach us some of the culture from his country — I saw that as an even more important education than going to school.

How did your housing sector journey begin?  ‍

When I left the army, my Uncle Ozzy rang me up and he used to be a sitting member for the National Aboriginal Congress (pre ATSIC) and he asked me to work for him. It took me to all the communities and I started to observe the conditions of housing. I had some money in the bank, and I couldn’t rent a house anywhere, and it devastated me. So my wife and I and the four children moved in to an old derelict house with my sister, and I started to realise that, look, I've got a bit of confidence after being in the army, I've got a bit of money in the pocket, and I can’t get a house — how are my brothers and sisters living? I thought,  I'm going to do something about this and I started an Aboriginal Housing company (the Budawang Housing Corporation).

And what was the highlight for you in setting that company up?

I think that people came together and worked together as a community. We all knew we needed things, and there was a lot of competition for housing but we made sure that the people who needed it (housing) the most, got it first. There was just unity in the town. It was hard work, but I felt we were all working together to help out each other in the community. And over the years we were able to grow the company to provide quality housing for our people in Batemans Bay.

And that led you on to a lot of other career highlights, including Deputy Mayor of Eurobodalla Shire Council, inaugural chairperson of the Aboriginal Housing Development Committee, the Aboriginal Housing Office in NSW and Board Chair of the Southern Area Health Services Board. You’ve had the great experience of seeing the changing landscape in both housing and healthcare support, what do you see as you’re biggest achievement?

That's a good question because it's a never-ending struggle to look after people. I think the greatest achievement was starting an Aborginal building company. We employed apprentices and we built houses up and down the coast. When I look back and see some of the houses that we actually built, and how they’ve sustained over the years, for me that’s been the greatest achievement.

We're speaking to you during NAIDOC Week — why is this week so important in the lives of all Australians, but more importantly First Nations peoples? ‍

Well, it gives us an opportunity to gather together to celebrate, to share and to care about one another, but really it's about higher learning. How we have travelled through this journey together. There are some sad points along the way, and we don't really focus on that (for NAIDOC Week), we focus on the celebration. Celebrating the culture, arts, songs, sport. Mostly, it's all about celebrating family and allowing family to come together. And remember that we are one people, the first people of this nation.

From your observation, how do you think we’re going towards that goal of true reconciliation? ‍

I've got different views on reconciliation — I think it’s the wrong choice of word. It’s all about relationships. And I think relationships are changing because a lot of non-Aboriginal people are starting to understand Aboriginal peoples’ call for the land, the call for freedom of living on the land, the resources of the land. And I think they're calling for us to have more involvement in that. Sometimes the people who control the money and control the power, they’re hard to get through to. I think a lot of people within their hearts want to build this relationship and this understanding. Because in the end, what we're asking for is justice. I think reconciliation has grown a bit, and I think the understanding and the knowledge and education is an ongoing thing. And the government needs to keep supporting it.

Tom Slockee is the chairperson of SEARMS, an organisation that provides housing and tenancy management services to the Aboriginal Housing Office and other Aboriginal organisations, including local area land councils, in the south eastern region of NSW. To hear the full interview with Tom, listen to the ahi Industry Connect episode here. You can subscribe to our Industry Connect podcast series via Spotify, Apple Podcasts and Google Podcasts. You can learn more about NAIDOC Week celebrations here.

Climate change and how the housing sector can help